“I believe everyone has a place in this world and I claimed mine – unapologetically.” Read more below.

“I believe everyone has a place in this world and I claimed mine – unapologetically.”

Jeff van Rooyen was born into poverty in Alexandra township in 1950. Despite being shackled by the physical and emotional constraints of apartheid, he refused to compromise his personal dignity and professional ambitions, and against all the odds graduated as a chartered accountant. Through further perseverance and sheer hard work – and recognising and grabbing opportunities when he saw them – he climbed the corporate ladder, working for some of the biggest assurance and advisory services firms in the world, opening his own practice, serving on oversight bodies, advising government officials and wrapping up a stellar career with a series of directorships on the boards of major JSE-listed companies. And at every step, Jeff gave back to the communities in which he grew up. In this book, he charts his remarkable journey from the township to the boardroom, and gives hard-won advice for those embarking on their own personal voyages.

“Apartheid tried its damnedest to shackle me as a black person.”

Jeff van Rooyen has held a number of significant positions in the public and private sector in South Africa including partner at Deloitte, chief executive of the Financial Services Board, non-executive director of MTN Group, lead independent director of Pick n Pay Stores, chair of Exxaro Resources. 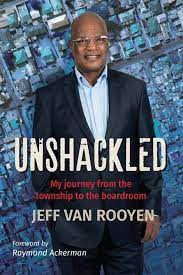