The powerful politicians and corporations who profit from impunity. Read more below.

An urgent and passionately argued call to action, The Unaccountables skilfully profiles the large corporations and private individuals who are all implicated in economic crime but have never been held to account. This book will anger many, who will now be able to put names and faces to those behind some of South Africa’s biggest corruption scandals, from apartheid to state capture.
Crucially, The Unaccountables focuses on 38 profiles detailing evidence of impunity and suggesting actions in each instance that could ensure accountability. Remember, South Africa is a wealthy country. The 2022 Africa Wealth Report estimates total private wealth in South Africa to be over $651 billion, more than R10 trillion. South Africa is home to more than twice as many high-net-worth individuals than any other African country. But these acts of violence, for that is what they are, by powerful individuals and corporations have driven millions into poverty.

In The Unaccountables, we meet them all, apartheid and war profiteers, the state capture profiteers, those who have profited from welfare, we meet the bankers and their banks who got away with laundering and profiteering, the auditors, complicit in economic crimes and, unsurprisingly, the bad cops. This book is led by research, data and years of investigation and, as such, is the most persuasive book to have been written about corruption in South Africa.

One of the editors, Hennie van Vuuren, is the author of the runaway international bestseller, Apartheid Guns and Money. 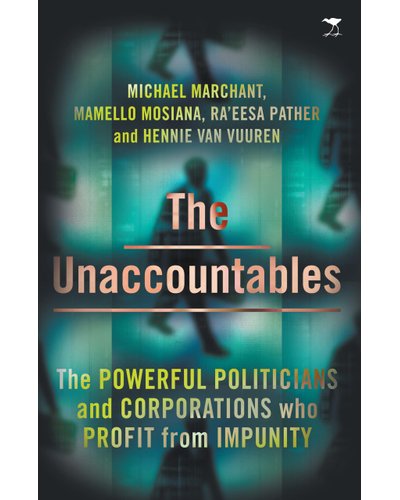